Blog - Latest News
You are here: Home / Best Practices / Taking up a new role to change the lives of older people after retirem... 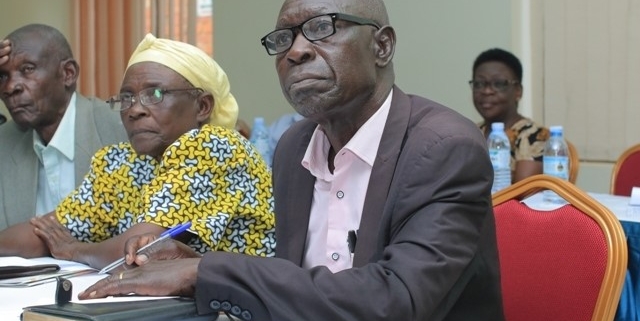 John Brown Elieru, Aged 76, is an Itesot by tribe from Katine Sub-county in the Soroti District of Eastern Uganda. John is a retired civil savant having worked as a Teacher, Headmaster and later retired at the age of 60 years from the position of a Head Teacher. He is among a few retired civil savants who still receive their pension from Government. When he was served a letter reminding him to retire at the mandatory retirement age of 60 years he felt the world of work and professionalism had come to an end as he did not know what would happen next having lost the clout and status of an officer in the government.

He later left office but was not sure of what he could do having failed to establish a business and commercial farming ventures while he was still in salaried employment. At the time his mind however was to go to his local village to establish himself as a farmer since he felt he was still energetic enough but the options which were available were not challenging enough to engage and would not give him the opportunity to interact with technical and professional colleagues as he had done over a period of three decades. As it is commonly said, “when one window closes others open”. This was a time when Uganda Reach the Aged Association (URAA) and other Age Care Organizations working with the Ministry of Gender Labour and Social Development (MGLSD), had successfully lobbied for older person’s political representation from the village to the District level and election for OP leaders were to replace for the first time.  John got interested and joined the contest to represent Older Persons as a District Councilor, an opening which despite his advanced age; would enable him to get back to his wish of fraternization and blending with district leaders, technocrats and other professionals in the line of duty.

He was later overwhelmingly elected as a District Councillor representing older persons at the Soroti District Local Council five to serve for 5 years from 2016. Based on his level of Education and experience in public affairs among other qualities he was on the other hand wondering how he could handle the new roles of lobbying, advocacy and representative roles given that his experience in civil service was very much different from representation in politics.

John later attended several pieces of training organized by URAA/ Help Age International and MGLSD on capacity building of OP leaders for effective representation. In one of the sessions during the training he had this to say: – “I did not know what to do after elections but now with this training now I feel I am equipped to take up the responsibilities”.

Due to his enhanced skills, he was later appointed as a Chairperson for Finance and Administration Committee at the district local government. With the enhanced capacity he was able to lobby for budget allocation from which Uganda Shillings 3 Million (Est USD 814.4) was allocated to older person’s activities. Which was a 96% increase from the previous year; in addition, He was also appointed a member of the Board of Governors of Olila High School as well as the Chair of the Building Committee for Soroti District Local Government, for all that time Mr. Elieru reports to have gained recognition in the district. Furthermore, his commitment, lobbying and advocacy skills empowered him to build a very good working relationship with the District Executive Committee for Older Persons, the District Council Executive Committee, and District Councillors who always held him in high esteem with a reference title “Mzee” (A word for an old held in high esteem or with a lot of respect).

With this, John felt he had begun a novel life with the capacity building for himself and his counterpart the District Female Councillor after retirement which he had never thought of, during a project monitoring visit, the two Councillor were quick to point out the capacity built enabled them to lobby and advocate for older person issues in the council as well as other forums with the attainments and numerous accomplishments above, after the first five years, Mr Elieru opted to stand for the NRM League Leaders leadership in Soroti and has since been appointed as the Administrator representing Soroti Districts. Currently Mr, Elieru is also an Orange Farmer. John does not only pride in his achievements as a councillor and benefits to older persons, he passionately encourages older persons to take up other assignments after attaining the retirement age, confirming the common saying “life begins at 60”. The project also appreciates John’s work being an impact story for the project.  Soroti district local government is also appreciated for having recognized the older councillors’ requests to support older persons’ activities in the district as a result of working very well with the counterpart Councillors supported by the project.

In remembrance of an inspiring Older Person Activist/Ambassador: Claudia Naluyima...