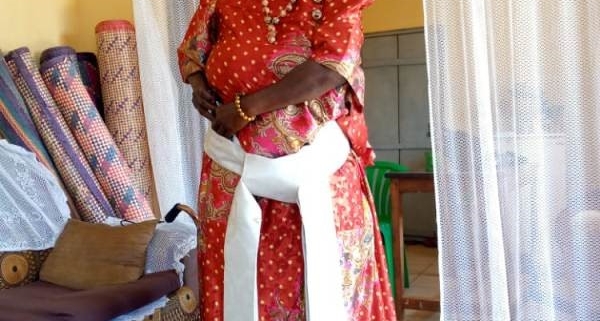 Mrs Claudia joined Uganda Reach the Aged Association (URAA) in the early 90s when it started, later became a Board of Directors (BoD) member of URAA in December 2016 till her death and her work over the years embodied everything that activism should be. She was determined and passionate, acting on behalf of our cause, demanding change, and making sure that older people’s voices are heard. URAA members now, pay gratitude to Mrs Claudia’s encouragement and, attend regular meetings where they decide on which issues they want to focus on and which ministries to target.

When Mrs Claudia became part of the National Endowment for Democracy Capacity Building Campaigns, she had been elected to represent Older Persons on the Mukono District Council in 2016 as a District Female Councillor for Older Persons, having trained as a Social Gerontologist from Nsamizi Training Institute of Social Development. From the Capacity Building training she took up the mantle of working with relevant public

health workers in Mukono believing that no matter how much money we have or whatever our age, we should all have access to free healthcare. Having heard about older persons not being listened to by doctors or many times being made to line up in long queues when they visited health clinics, she knew she could use her leadership Skills, knowledge and Competence in the public health and public service system to make a difference. She was aware that there were many good doctors and health workers but not all of them took older people’s health issues seriously. So, she rallied her District Council to develop and pass an ordinance in the affirmative to make sure Older Persons received the treatment they needed without being made to follow long queues while also tackling ageism in the transport sector directly.

Democracy to vote for people of their own choice and the fact that older persons are discriminated against from many socio-economic opportunities was one of the areas where Mrs Claudia helped make lasting change. She campaigned to have a National Elders’ League, where she also served as its National Treasurer, Mrs. Claudia advocated for older men and women to be included in government programmes, helping secure a change in government policy on the inclusion of older people on socioeconomic agendas. Mrs Claudia also joined the campaign, calling for Uganda Government to ratify the African Union Protocol on the Rights of older persons, Mrs Claudia since 2017 join forces with younger activists and when young and old came together, their request could no longer be denied. Mrs Claudia and others have always been in support of the SDGs’ commitment to “leaving no one behind” including older people.

We will remember Mrs Claudia as a determined activist who achieved real change in the lives of older people in Uganda. She never feared to knock on the doors of government officials including the President since she was also serving in the capacity of the Treasurer of the National Resistance Movement – NRM (the ruling party) Older Persons League and lobbied businesses and individuals to improve the lives of older women and men. Mrs Claudia once said as she called on the government to take action on older people’s rights “We’re not demanding too much, or something that is impossible to be done. I want my government to give older people a stronger voice and acknowledge them as an important part of the family.”

We need smart, energetic, courageous activists who act with integrity and vision to continue to push politicians and galvanise others to take action on older people’s rights.  We need to continue building capacity to have more activists like Mrs Claudia and thank her for everything that she did.

Mrs Claudia Naluyima Kamya will always be missed, May Her Soul Rest in Internal Peace.

Article By : Were Wataga Emmanuel Fred

Retired but not tired